Last summer I wrote a blog post about floating apples – Going Bananas Over Nuts and Apples. It’s a special topic for me, as is gravity and that kind of mystery.

That mystery is imagination itself, where ideas live, play? For me it is without a doubt the most real aspect of the universe, intact beyond anything physical, and fluid more than static. I think some of that is there when the apple floats – when the tree can no longer hold it, and yet just before gravity begins the descent. And I wonder, “Do butterflies “know” something of this, but in a very different, magical way?”

Please keep that in mind, as it may the best way I can describe some of the thinking behind this new painting. It’s called “Floating An Apple” and it was done somewhat with Magritte’s “Son of Man” in mind. Perhaps this is my tribute to his message in that picture, show here: 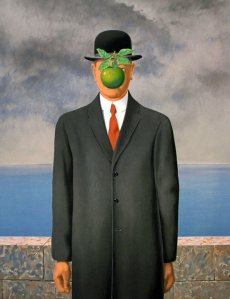 The Son of Man by Rene Magritte

On the painting’s Wikipedia page [1], Magritte is quoting as saying this about his painting: