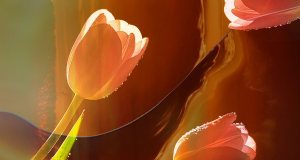 When I first released my debut novel it was kind of thrilling – the feeling, not the book – it’s exciting but not a thriller!

Back then I didn’t realize how difficult it is have one’s book “discovered”. Naive I suppose, but I’m glad I was . . . without a certain amount of child-like innocence I’m not sure the book would have ever been written. I like to think there is plenty of that naivete throughout Dawn at Last, which is odd given the rather serious and adult themes . . . undercurrents.

It felt much like preparing a fine meal, ten years in the making, and then opening the door to hall, ready to serve up a feast. I like to cook for someone special, one of life’s simple pleasures. While I wrote the novel because I just had to, it was never just for me but rather for a guest of one. Often I’d think of one person reading it, but no one in particular. I can’t imagine writing in any other way.

Last week I came across something on YouTube that reminded me of this joy of launching my novel. It’s an old Disney clip, from that string of musical stories that came out just while my dear ones were my little ones. Watching them with my girls was very much like being a kid again, at least for awhile.

Aside from the launching of the book though, it’s quite remarkable how this short musical piece also ties in to much of the content of the book – in a condensed kind of way.

There is this issue of serving – giving with no expectations other than the pleasure of another – turning work into play? There is the curious combination of a little clock and a candle, an odd combination to say the least! For me clocks give a false perception of time, while with candles – within the flame – there is something timeless.

There is fine French dining, plenty of dancing, reasons to pop the cork, something about flowers and even tea. To top it all off, there is only one guest, and it seems an inquisitive one, delighted by the feast. She’s very much an individual, as are all six of the main characters in Dawn at Last.

The funny thing is that perhaps this individuality comes out the most when they all sit down to one meal, or should I say when they all try to work together in preparing it? Now that I think of it, that Ben guy is smarter than I thought . . . he got away with simply pouring a little champagne . . . kind of like me getting out of doing the dishes!

I hope your week is full of “Oopsy daisies”, so please be my guest and take a few minutes to enjoy this fine dining experience.

6 thoughts on “Be My Guest”